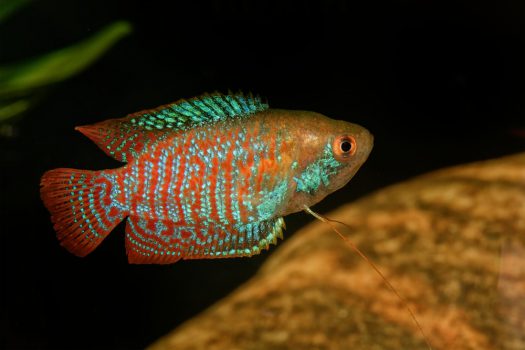 Dwarf Gourami At a Glance

Gourami is a tropical freshwater labyrinth fish of the macropod family Osphronemids. They live in Southeast Asia. Trichogaster is named after the Latin word “trichos” which means “threads” / “trichos.” In today’s classification, a gaster had been replaced with a foot. Tactile mustaches after a loss are easily recoverable. It is a popular aquarium species. It consists of six different types. Trichogaster was named (the body has threads on the abdomen), he received the light in their pelvica’s fin, and they grew up to become long threads in water.

How big do dwarf gouramis get?

Dwarf gouramis get to be around 3.5 inches long when they mature. However, the general range is 2 inches to 4 inches.

As a general rule, one inch of fish requires at least a gallon of water to live comfortably, so you should factor in a fish’s adult size when determining how big of a tank you need and how many fish you can keep in it.

How long does a gourami live?

Dwarf Gourami lives for three to five years. Depending on the species, however, certain gouramis can live longer. For example, pearl gouramis have a lifespan of five to eight years when provided with proper tank conditions and a healthy diet.

Here are some things you can do to prolong their lifespan and keep them healthy:

What Are The Different Types Of Dwarf Gourami?

This fantastically colored fish is one of the most beautiful variations of these species. As their name suggests, blue dwarf gouramis are bright blue and almost glowing. They have distinguishable reddish-brown lines running across their sides and fins.

Their fins also have a light brown edging. Their scales are large, easily recognizable, and very close to each other.

Like the blue dwarf gourami, the powder blue dwarf gourami has almost no other colors mixed in and is much brighter than its friends mentioned above. Although this variation isn’t supposed to have anything apart from blue on their body, dark colors sometimes slip in.

The flame dwarf gourami variation earned gouramis their popularity 40 years ago. After this color mutation, interest in breeding and keeping gouramis shot up.

Looking somewhat like ember tetras, the body of this fish is bright red with an orange gradient. Their fins also have a mix of these two colors.

The honey dwarf has a more modest coloring. They are primarily dark red with some orange mixed in. Their caudal fin will almost always be colorless. Their other fins will sometimes have dark patches that, in some cases, reach the body. However, you can find honey dwarfs with entirely black or grey heads.

The neon blue gouramis retain their beautiful blue color and improve upon it, making it twice as bright and visually striking. They also have red stripes running across their body, which under excellent conditions, may become even brighter and turn the fish into a crazy splash of blue and red.

What Are Some Good Dwarf Gourami Tank Mates?

A good list of Dwarf Gouramis’ best tank mates can be found below:

The dwarf gourami is not very large, as their name implies. Although males can be aggressive with other animals, they are otherwise unfriendly to humans. This group requires tank mates that are not too big or violent to avoid being attacked or killed. The ideal kind of fish for mixing gourami is a small, peaceful fish. Gourami comes from the black water environments in South East Asia – such as slow-flowing rivers, ponds, or rice paddies. They are highly adapted to warm water that is soft and mildly acidic, and they can grow thick.

Can Gouramis Live in a Community Tank?

Gouramis can make good community fish, provided their tank mates are peaceful. They are pleased in groups of at least four individuals, so they make good candidates for community tanks. However, if their tank mates are too aggressive, they can become frightened and stressed. They will usually hide away to avoid confrontation and lose interest in eating. If this happens, the fish may stop growing or even die.

Gouramis are relatively friendly by nature. However, as with other gourami species, male dwarf gouramis can become territorial when they reach maturity. This is especially true if there is only one male in the tank. In these cases, the males may chase and nip at each other until one establishes dominance over the others. Once this has been done, males tend to leave each other alone unless there is another compatible male in the tank with whom they can pair up. Females do not generally become territorial but may chase each other from time to time during the spawning season.

Can angelfish live with gouramis?

Yes, angelfish can live with gouramis. They are compatible tank mates and can get along nicely. However, because angelfish can be aggressive and territorial sometimes, ensure they don’t differ much in size.

Here are some other things you need to do if you’re keeping angelfish and gouramis together:

The ideal tank for a dwarf gourami fish is an aquarium with a small amount of slow-moving water and plenty of floating plants. These fish do best in a community tank with other small fish as their tank mates. Regular water changes are
necessary to keep the tank clean and the fish healthy.

These fish do best in a community tank with other small fish as their tank mates. Regular water changes are essential to keep the tank and the fish healthy. Adding live plants can also be beneficial, as they help to oxygenate the water and provide hiding places for the fish.

As social creatures, dwarf gouramis thrive best in large groups of at least four fish. Therefore, you should have a minimum tank size of 20-gallon tank (or bigger) to keep your gouramis happy and social.

Dwarf gouramis’ unique organ allows them to breathe air directly from the surface. This makes the dwarf gouramis a great fit for smaller tanks or aquariums. The dwarf gouramis is also known for being good community fish and getting along well with other tank mates.

When breeding dwarf gourami, it is best to use a separate breeding tank. This tank should be at least 10 gallons in size and have floating plants and some live food available for the fry (baby fish). The water level should be kept low, and the water temperature should be around 80 degrees Fahrenheit.

You can try adding a powder blue dwarf gourami to your community tank to encourage breeding. These fish are known to be good parents and often build a bubble nest for their fry. However, you may still need to remove the fry to a separate tank after they are born, as adult dwarf gouramis can sometimes eat their young.

How often should you feed gouramis?

You should feed your gouramis twice a day. Only feed them small amounts of food to prevent the water from becoming dirty and contaminated. Give your gouramis no more than what they can eat within two or three minutes.

You should pay attention to the quality of their diet as well. Most gouramis are omnivores and thrive best when given a high-quality, varied diet. The best foods for gouramis include:

Dwarf gouramis are surface-feeders that generally get their food from high-quality frozen or freeze-dried foods. The diet for a typical dwarf gourami includes bloodworms, brine shrimp, and daphnia.

Dwarf gourami is a beautiful, easy-to-care-for fish that is perfect for any aquarium. They are peaceful and make a great addition to any community tank. Dwarf gouramis are very hardy fish and can live in many water conditions.
They are also very adaptable to different tank sizes and setups. However, there are a few things to keep in mind when caring for your dwarf gourami.

Another critical aspect of dwarf gourami care is diet. They are omnivores and will eat both live and frozen food. However, giving them a variety of food is vital so they get all the nutrients they need. A good rule of thumb is to feed them small amounts several times a day rather than one large meal.

Are dwarf gouramis hard to keep?

The dwarf gourami (“Tichogaster lalius”) is famous for its brilliant blue colors and quiet demeanor. These species perform exceptionally well in community tanks and are generally difficult plants to keep.

How many blue gouramis should be kept together?

The number of gourami species that live together varies according to the tank’s capacity. Ideally, two or three gouramis fill about 10-gallon bottles of water, so you’d need five gallons more for each additional gourami.

The Gourami Blues are aggressive. They also have gold and a kiss of fish. You can stop them because that is their natural way. It’s likely that when we took down Blue Dwarves they would begin attacking a different species of fish in our
tank.

Will blue gourami eat other fish?

Gourami eats other animals too. Although gouramis are usually tranquil they are nonetheless predatory. They are known for eating small fish.

What fish can live with gourami fish?

Gourami is a diverse group of medium-sized fishes. Some are easily able to be stored within an aquarium, but certain species play poorly with others, some of the species are too timid to keep with any fish.

Because dwarf gourami is social fish, they need a couple or a smaller school. This is normal. If left alone, they will be timid and spend days hiding out.

Dwarf Gourami one-of-a-kind, beautiful fish that people are drawn to.

We hope this care guide helps you look after your Dwarf Gourami and ensure they have a happy life!